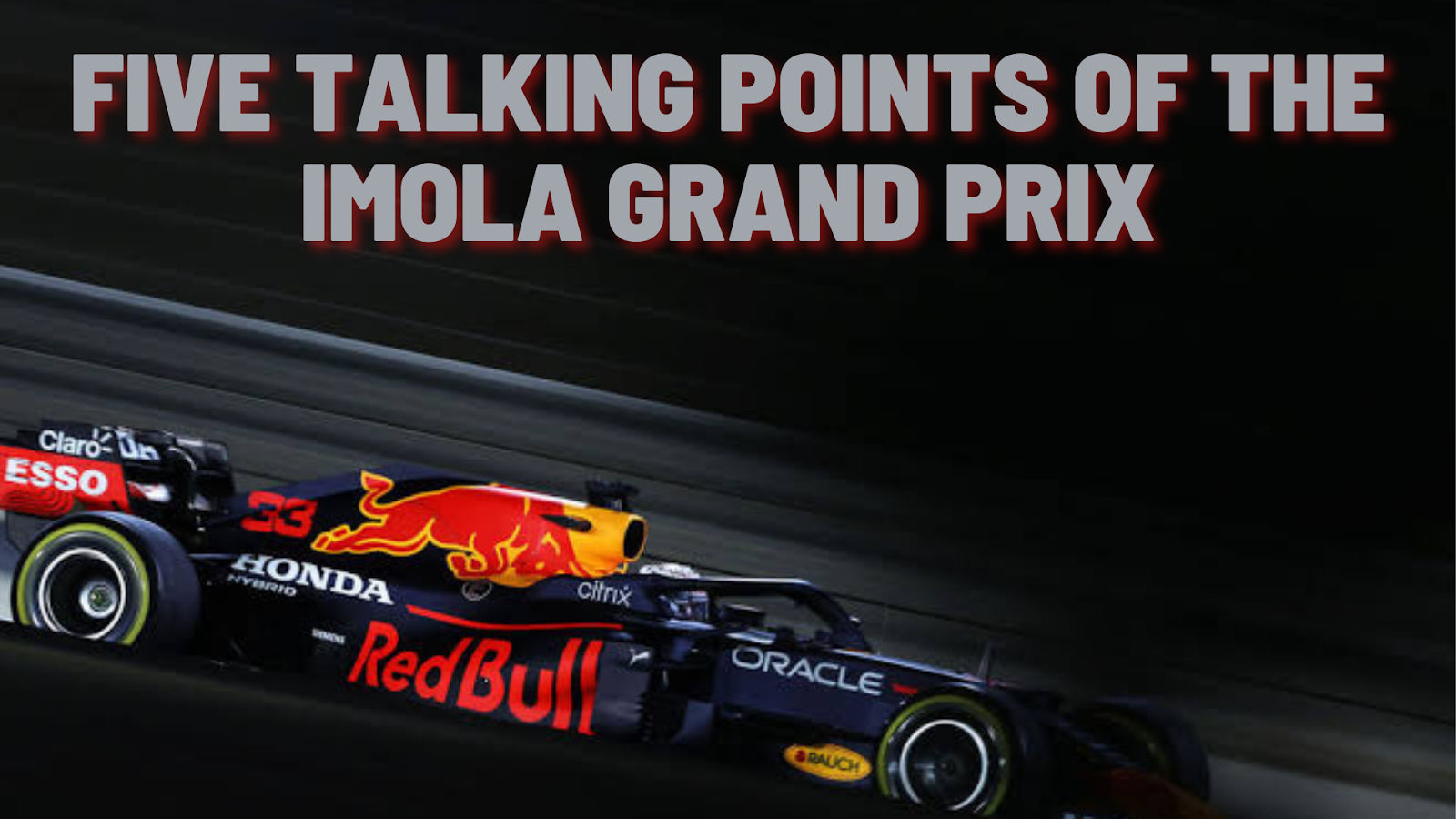 It might be early days in the ongoing Formula One season but the Emilia Romagna Grand Prix delivered lots of drama and excitement at the weekend. The Imola GP as it’s also known, only contributed to the idea that the 2021 F1 season could yet be the most exciting and competitive one in a while, thanks to the unpredictability and error-laden nature of the race.

From the rookie, Yuki Tsunoda to the experienced hands of the seven-time champion, Sir Lewis Hamilton, the Imola GP had his fair share of mistakes and surprises leaving the audience at the edge of their seats and yearning for more. Even the most experienced better would have lost money trying to predict the nature of the entire race weekend, but some things look set to be a constant this season. Here are five talking points from the Emilia Romagna Grand Prix.

The first two races of the season have shown that Red Bull’s preseason pace was no joke and the former F1 champions who are perennial bad starters are early contenders to the Mercedes F1 team’s crown. Max Verstappen might have been unlucky to finish second in Bahrain three weeks ago, but the winds of fortune blew in his direction as he recorded a dominant victory at Imola.

Hamilton finished in pole position during Saturday’s qualifying session, however, the Brit only secured front row thanks to individual errors from Sergio Perez and Max Verstappen, who lined up in 2nd & 3rd place before the start of the race. Verstappen picked up good momentum before shoving (legally) Hamilton aside for the first position at the start of the race, leaving Mercedes in a strategy struggle to get past the Flying Dutchman.

Sergio Perez might have finished in a disappointing 11th place thanks to the error-laden nature of the race but Red Bull’s message to the rest of the teams is quite clear; we’re contenders and we’re not going away.

Red Bull might be the team to beat so far, but the sister team, AlphaTauri is yet to translate their preseason performance into regular-season points. Rookie, Yuki Tsunoda picked up a ninth-place finish in Bahrain, with his more experienced teammate, Pierre Gasly failing to finish the race.

Both drivers were expected to be challenging for a top-five finish —with some even predicting a podium finish for either— but neither happened as Tsunoda finished in 12th place, after a torrid qualifying session where he failed to record any time. According to his standards, Gasly didn’t fare any better after a fifth-place finish in qualifying, the Frenchman ended the race in seventh place, which leaves AlphaTauri in fifth place on the Constructors’ standings.

From the tales of a disappointing team to tales of one on the come up. After an extremely disappointing 2020 Formula One season that saw Ferrari finish sixth, yeah, you read that right, sixth place on the constructors’ standings, “the Prancing Horse” appears to be on a resurgence this year. Team principal, Mattia Binotto already downplayed expectations for the season by insisting the team’s focus is on the 2022 season but with recent performances, it’s hard for fans of the Italian team not to get excited.

Following their 6th & 8th place finish at the season opener in Bahrain, Charles Leclerc and Carlos Sainz took a step further by finishing in 4th & 5th position respectively, despite Sainz’s disappointing performance in qualifying that saw him bow out after the second session. Ferrari is finding the necessary pace needed to compete, they might not return to the top of the standings this season but the team in red could restore their pride this season.

The Brilliance of Norris

Lando Norris isn’t just one for the future, but a driver to watch out for the season. The McLaren driver missed out on a potential pole position in qualifying after his final lap in Q3 was nullified for exceeding track limits, leaving the Brit to start the race in seventh place behind teammate, Daniel Ricciardo.

Norris had the last laugh on Sunday, as he finished in third place, securing his first podium finish of the season and second overall in his F1 career.

Valtteri Bottas hasn’t had the best start to the season despite finishing in third place on the opening weekend in Bahrain. The Finnish driver had a disappointing qualifying session, where he finished in 8th place and things went from bad to worse on Sunday, as his race came to a premature end after a nasty collision with Williams’ George Russell.

Meanwhile, the struggles continue for Sebastian Vettel and the Aston Martin F1 team. After all, Sebastian Vettel is one of the best Grand Prix drivers in history. The four-time champion finished 13th in qualifying and also failed to finish the race on Sunday leaving him with no points so far and Aston Martin in sixth place.